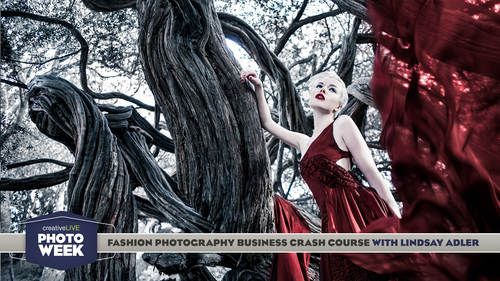 This segment is all about it's, not a fashion photography crest course, but the fashion business or putting together shoots or getting paid or making money because every single thing that I learned about how to be successful in commercial and portrait and fashion photography I made up along the way, but I mean, I looked there wasn't any guides on how to get into fashion photography once in a while, there would be, like, across the country, some guy was giving, like an hour talk somewhere in l a like I just couldn't find anything, so I've kept mental know along the way, all of the things I wish someone would have told me, the terminology, the ways to reach clients and things like that. So this presentation is more definitely more word heavy then aa lot of I love showing images, but this is a lot more definitions and things like that because there's things I just wish I would have known, so please feel free to stop me, but I'll be covering everything from, like, what's a call sheet. How ...

Breaking into the glamorous world of fashion photography requires in-depth knowledge of the industry — from the latest terminology and trends to how to work with magazines and modeling agencies. Professional fashion photographer Lindsay Adler will share her trade secrets with you in this 90-minute course on making a name for yourself as a fashion photographer. You will learn everything you need to know about industry standards, working with models, putting together a crew, and how to get land magazine spreads and fashion campaigns.

I'm glad that I took this course. I have an interest in fashion photography, but wanted a course that focused more clearly on the business end. Lindsay definitely delivered. This course has a ton of valuable information for people looking to break into this particular niche of photography, and I highly recommend it.

In 2018 I realized my niche in the full sized fashion photography industry and set about creating a portfolio. But as I learned more, I realized how much I did not know about the fashion industry and how to start making money. This was a very good and insightful class, Lindsay gave concrete actionable advice that one can put to use wherever they may live. This course was well worth the money. I highly recommend it. - Neil Adams