Lesson 1 from: How to Make Paper Flowers 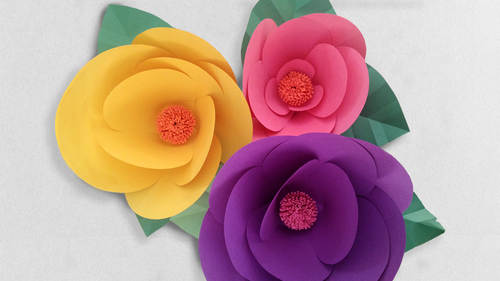 Lesson 1 from: How to Make Paper Flowers

We're going to be constructing a garden of paper flowers. Two completely different techniques were going to go back into our party session to, and we're going to show you what you can do with those flowers to create some fun and festive party decor for your next celebration. So let's begin with the materials that we have at hand. Now you see in front of you, you have some colored text, wait and cover, wait paper, and then we've also got some crepe paper. We're going to set that crepe paper aside for the time being, and we're going to get to that in just a bit. But what I want to start with our some giant paper flowers created with simple eight and a half by eleven sheets of paper. Now you can really use any kind of paper for these. I have done these out of simple and inexpensive construction paper. What you see before you is a little bit nicer. Text wait paper for the petals, and then we've got some heavier cover wait paper that we're going to be using for the leaves. Now how I came up...