Lesson 5 from: In Person Sales Techniques for Photographers 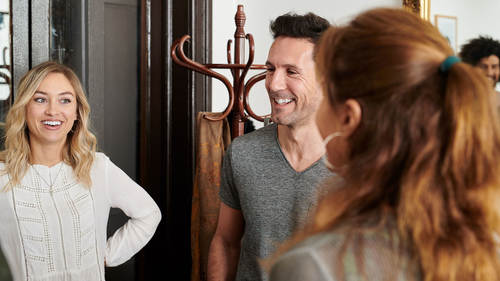 Business > In Person Sales Techniques For Photographers > The In-person Sale

Lesson 5 from: In Person Sales Techniques for Photographers

So this is my sales room. We have a very large projection screen in my sales room. I love projection. Being able to project on a large screen is infinitely valuable to me, because I can actually show my clients actual sized images on that screen. Its about 10 foot wide and six foot high. So I can project any size they might want onto our screen and say, this is exactly how it'd look in your home. My clients, as I've mentioned, will also have sent in some snapshots of the walls of their home. I can actually project those onto our projection screen and then digitally slide their favorite portraits onto their own walls, so they can see exactly what they'll look like. So its very valuable for us, too. We do this all in ProSelect. Other things you'll notice in our studio here, we have lots of stuff on display. This again is all created in desire for our products. So there's lots of canvas on the one side, I have frames, I have metals, composites and collages and stuff there. It's all there ...

Ben Shirk is an internationally award-winning professional photographer. &#160;Growing up in a log cabin near a small farming community of Wilton Iowa, he spent his days exploring the woods, swimming in rivers and developing his imagination.
SEE INSTRUCTOR'S CLASSES

Good inperson salescourse for creative entrepreneurs. To the point and direct help you increase sales success.