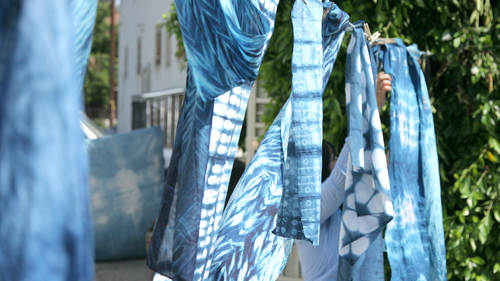 So we've got our stitch newly piece it's here and it's been soaking in the water now for about an hour, and I'm going to go ahead and put it in the vat, and then we will massage the fibers underneath the surface of the vat, and we never wanna let our work dropped to the bottom of the that because there is sentiment that probably has gathered down there, and so you always want a kind of work your fabric just underneath the surface of the vat, but never let it raise above the surface because what'll happen is you have it the possibility of getting air bubbles in your work, so you keep massaging your fabric. You want to make sure that the pigment gets in and out of all of the little folds that we made by pulling the thread, and after you've had it embarrassed in the vat for about a minute or two or three, you want to go ahead and squeeze thie excess die out of your piece, and as you're doing that, you're slowly raising it up into the air, trying not to create too much oxygen in the vat. A...

nd here is our peace and it's going to slowly change went from yellow to green, and now it'll go to a blue, so you want to give it some time um I'd say if we were out in the sun, this could happen within a few minutes, but inside it might take a little bit longer and you can see is long as you can see a shade of green on there that it is not awfully oxidized, so we really want to give this in time to sit and turn blue, and the other thing you could do is kind of open up some of the tux here and you'll see where the air still has not hit the fiber one and give it a minute. So in order to prevent the indigo from cracking or kind of marble lean and kind of creating some lines or some areas that maybe don't observe the die, you need to read if your fabrics the japanese believe in dipping up to thirty times, which I think if you have the time, it creates the most beautiful, beautiful midnight blue indigo for our purposes today, I think if we dipped three or four times, we're still going to get a beautiful indigo color and hopefully prevent any cracking. So this is the second tip now, and I'm doing the same thing. I'm just massaging the fibers under the surface of the vat, and I'm making sure that I'm kind of just pushing in pigment to every little fold in area. And then when I think it's got a really good overall coverage of the die I'm going to go ahead and do the same thing I'm going to squeeze it out very close to the surface make sure that I do it nice and low and then we will let it oxidize again and you can see that the second time you dip you're not going to get such an extreme yellow to green to blue but you're still going to get kind of that teeley shade of blue tilly shade of green blue and that tells you that the the indigo is still working and it's still changing the color of the white scarf again it's always good to kind of open it up let the air hit all the different areas you can see in there where it's still needs toe turn a bit okay we're going to dip it a third time and if you have any bloom that's build upon your that make sure you always take the bloom off before you put your your fabric in because that can that can leave sometimes some spots on your fabric there are japanese vats that people you know keep for you know years and years you know fifty, fifty sixty seven year old vats and they feed them every day and they tend to them almost a ziff they were an animal and there is something very alive about an indigo vat and actually, if we wanted to continue using this that I could probably keep this going for weeks on end, you have to maybe feed it a little bit each day by giving it a little bit of indigo. Um, and then if if you have found that it becomes too blue, you may need to add a little bit of the theocracy to reduce thie indigo, but I always introduce those items one at a time, so that I'm not overloading the that you really want to kind of do it very gently and just make sure that you're treating it, you know, very slowly and carefully each time that you add something new to the bat. So this is looking great, and I think it's a nice, dark blue and that's what we're going for here and remember, with repeated dips, you're building up the you're building up the color, so I think sometimes people think it's, how long you use, leave it in the vat, but as long as you leave it for a couple of minutes, up to four minutes, it doesn't need to sit in here up to an hour that, more importantly, is the repeated dips, because then you're building up the pigment onto the fiber, so this is where some time comes in in within two go dine is it's kind of nice to have a couple of projects going at once a couple different of your chivalry projects so that when you do start dying, you're going from this piece to the next piece to the next piece and you're really you're kind of being very efficient with your time, so this is looking great, and I don't think we need to dip it again. It looks like it's covered the surface really, really well, so I'm going to go ahead and I'm going to rinse it, and so I'm starting with a bucket of clean water and basically I'm just going to dip it, and this is I consider this its first wash, and you can just kind of make sure that the water is getting in and out of all the folds to get any excess in, to go off of the scarf. Some people like to have another bucket of water with a piece of ivory soap in it, and they kind of soap it down and really scrub it, but I'm going to end up putting all of my pieces in, awash with blue jeans, and that will take out any extra die that might be left in the pieces, so now we've got our cotton scarf it's been dipped three times and now it's ready to dry.