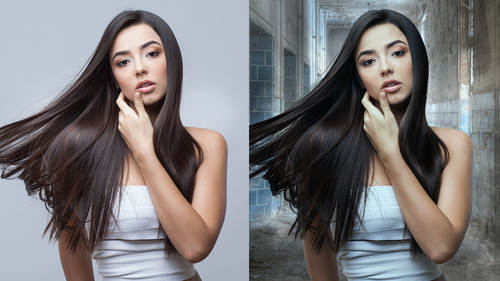 Let's talk about what makes a good mask for compositing and these are a hundred percent the most common errors I find. First of all absolutely way too crunchy critters, too hard, most common mistake I find, or it's too soft. Missed bits, that means someone has done like a selected mask and they've missed pixels, and they don't catch it, it's really hard to catch it on your screen, it's in the print you find it. And it's very hard to catch it on a little proof print that you're doing in the office, but holy moly guacamole, when it is on the sunset billboard, you can see it, or when it's on that bus going by, or when it's on that ad that's at the hotel down the road, sitting in someone's hotel room, you can see it. So using the third issue is people use the wrong process, and what I mean by the wrong process is Jesus how many tools are there for Photoshop for masking we're gonna go through 'em, which is the best for what. So if you're an advanced user and you think why is she talking abo...

ut this basic stuff, please bear with me, because I clearly it's not getting through to people so let's take our time and really just review some stuff. So too blurry or too sharp, that means the pixels are too soft for the image or they're too crunchy, which again is the most common problem I have with people giving files to me, they're mask is too hard or it just doesn't match the shot. So if you have a shot of me, I mean I've got all this hair, if you're focusing here especially if it's a more wide open lens, my hair's gonna go out of focus as it gets out in the back, well that should be soft, the mask should be soft not crunchy. And do you guys notice like you get things and they look like the gingerbread man right, everyone uses the same edge for the entire piece and that's just not gonna fly. Missed pixels, this is super super super common especially with the usage of Select a Mask or Quick Selection. So what I mean by that is if you if you can see here in this picture, you can see that there's little dropouts and I want to be clear about the dropouts because I think people think when I say missed pixels that they think, oh they didn't catch the pixels so it's blacked out, it's both. So if you look on the screen here, you're gonna see that some of the pixels are really hot white and then you've got black pixels. So what happens with these Select a Mask things is not only does it take too much in some areas, it doesn't take enough, and so it's that push-pull because the mask is black and white right, so then you have to paint with black to take out, then you have to paint with white to put in and you're having to go back and forth. And what I find is rather than using the right tool, and go a slower route at the beginning, you're always battling mask in, mask out, wax on, wax off, you know what I mean? You're going back and forth so maybe the thing is to use a slower process in the beginning, but to have it take less time in the end. So that's the kind of stuff we're going to talk about. So I want you, the people to think differently because everyone's like I'll push a button and it's done and it's not, okay. So we're gonna understand, talk about a few different techniques just a few, because I only have an hour we're going to understand how to manipulate the mask, to make more convincing composites, and what I mean by that is we're gonna show you how to dodge and burn or constrict, so that your item looks right in the scene it's at. We're going to apply different selection techniques, and we're gonna, not really talk about color because it's only an hour but I want you to know that all of these selection techniques work for color as well for when you're using adjustment layers. Cool?

In this class, Lisa will teach you how to get to the next level up in masking images/toning edges so that your images meld together. Whether creating a composite image for your personal work or for a client- understand masking tools to make the most seamless file.

Lisa is one of my favorite instructors on Creative Live. She is smart, fast, funny, and packs more great info in each class than anyone else I have seen. Admittedly, I watch her classes multiple times and often do a little side-by-side practice with her support here, but I have learned so so much. Highly recommend her courses.

Wow! I am so glad I bought the studio pass because I am going to have to re-watch that several times before I can pack all of that info into my brain! These masking techniques are so applicable in so many different situations. Lisa does a great job explaining as she goes, the how, what, when and why you would use different techniques for different situations and different subjects. What a great class!

I really enjoyed this class. It is fast paced though, and probably not for a beginner. But I really appreciate how much information is jam-packed in this short course. For anyone familiar with photoshop who wants to improve their masking skills fast, this is a great class. I would highly recommend this and any other class taught by Lisa Carney for advanced photoshop techniques.