Lesson 1 from: In Focus: Starting a Personal Project 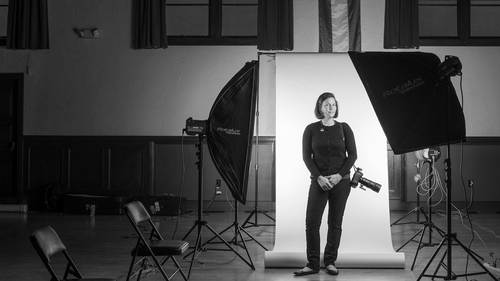 Lesson 1 from: In Focus: Starting a Personal Project

1. In Focus: Starting A Personal Project with Stacy Pearsall

(applause) Thanks Kenna. Well I'm so thankful to be here with y'all this evening. And you know what, you said that I'm the only woman to do that yet. Because there will be more, you know? (cheering and applause) And that's why I'm here, because I think we all draw inspiration from each other, and we learn from each other. I would've not achieved those awards or those recognitions without having really good mentors. And also part of that is continuing to push yourself in unique ways. And that includes doing personal projects. So this evening I'm gonna talk to you a little bit about my project, the Veterans Portrait Project. And just what it means to do one. Because our personal and our professional lives, they collide and they compliment each other. And we can draw those two interests together in order to better ourselves. For me as she mentioned I was a combat photographer. And that's where this all began. At 17 I didn't do anything prior to that. I was in high school, I enlisted, I ...

Stacy L. Pearsall got her start as an Air Force photographer at the age of 17. During her time in service, she traveled to over 41 countries, and attended the Military Photojournalism Program at S.I. Newhouse School of Public Communications at Syracuse University.
SEE INSTRUCTOR'S CLASSES

Yes. If you like photography you should watch this. If you have a desire to move people with your personal passions, and to grow yourself at the same time, you MUST watch this. Stacy is a great communicator with the authority to teach about personal projects. She helps answer questions like: - What can I draw from my experiences? - What am I willing to forgo in life to benefit someone else? - What is a skill that I have that I can bring to a personal project? In this course Stacy teaches us how to start well, keep balance while staying passionate, set goals, find funding and finishing well. This was the class I was most excite to watch in Photo Week 2017 and I'm so glad I did. Thanks Stacy. "Personal projects should be a healing process too. If you find something that really is diving deep into your own personal life it’s going to force you to reflect on yourself too." - Stacy Pearsall

I've been thinking about what types of personal projects I'd like to do. Perhaps, using a personal portrait to segue into another genre of photography. I'm so glad that I took Stacy's course because it came at the right time for me. She gave excellent advice on how to get started with personal project ideas, and what the most important things are to take into consideration. I'm very excited to implement her advice.

Well worth the price free :) but to be fair would be worth paying for, I went on to buy Stacy Pearsall Body language course, immediately after watching as I wanted to give something back. Highly recommended Stacy is clearly a very genuine person which comes out via her conversations with audience and that to me means a lot.