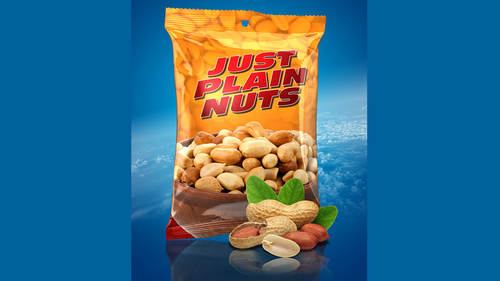 let's go in and add the label or the name of the product to go back to the material. We're gonna go back into the diffuse texture here, and we're going to set some text. So I'm going here, set a text layer, just It's just plain nutty, right? Do that and scale it down a little bit. I'm going use that fund. That's really kind of a happy accident, cause that was actually the phone I was going to use. How about that? So this is actually a type kit Fun. It's available from from Creative Cloud. You just go to the tight menu and right here at the top, You see, add funds from type kit, massive library of funds available if you're a creative cloud member and you could just sink them right to your to your creative cloud, APS and I use them right away. So it's gonna massive library of funds available. So So with that, um is going to take this and just rotated a little bit, make it a little bit more interesting and even skew it just a hair. I'm just right clicking or or or control clicking on it, ...