Lesson 2 from: Introduction to Letterpress Printing 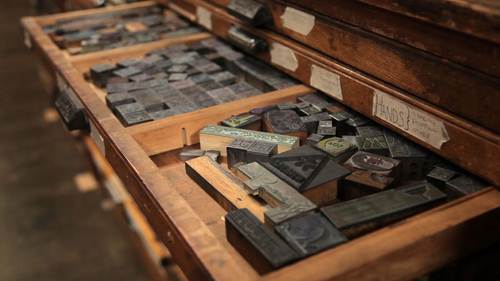 Lesson 2 from: Introduction to Letterpress Printing

2. A Very Brief History Of Letterpress

All Sorts of Type

A World of Possibilities

A World of Resources

letter Press printing has been around for a long time, ever since Johannes Gutenberg invented movable type in the early 14 hundreds. So I guess you could say that letter press printing was the cutting edge technology of the 15th century, and not much has changed since then. We still use metal movable type and for some things wouldn't type for practical purposes. But I'll get into that a little bit later when we actually start to print. The press is behind me are a variety of type of printing presses that are used for letter press. Some people actually refer to them as letter press presses, but that's actually incorrect. There's no such thing as a letter press printing press. What they are is printing presses that air used for letter press printing. Variety of types include a vander cook cylinder press that was made in the 19 forties up through 1972 when the Vander Cook Cylinder company stopped manufacturing them. So if you're lucky enough to get your hands on a vander cook cylinder pre...

ss, consider yourself really lucky, and you'll want to know all the ins and outs on how to maintain that. Since nobody's making the parts anymore. There's also other types of presses that are used for letter press printing, including a clamshell press also known as a jobbing press, also known as a Platen press. There's a lot of different names for the types of presses that are used for letter press printing, but they all essentially work the same way. One key element to let a press printing is that everything that you put on them to print needs to be 10.918 inches high. We'll talk about a little bit about that a little later, too. There was one printing press in this room that will show you when we take a tour around the studio, and that one is made in 1911. And it's the same type of printing press that was used to print newspapers around the Civil War era. But this particular presses made in 1911 so letter press printing wasn't actually considered an art form. Originally, it was a means of communication. It was used for printing newspapers, magazines and other periodic ALS to communicate information to people on college campuses across the country. There's usually a lot of press studio hidden there somewhere on campus, you won't find it near the painting studio, the drawing studio, the sculpture studio or anywhere near the fine art swing on most campuses where you will find it is somewhere between auto shop and wood shop in the industrial arts complex. But now, since letter press printing is no longer has the burden of communication on it, it's become free to become an art form and is now used by graphic artists, artists and hobbyists alike to express creative thought. There's a poster on the wall in this studio that kind of sums up where letter press printing falls among all the other art forms. It's an art form that supports all other art forms. This is a printing office, crossroads of civilization. Refuge off all the arts against the ravages of time. Armory of Fearless Truth against whispering rumor, Incessant trumpet of trade. From this place, words may fly abroad not to perishes waves of sound but fixed in time, not corrupted by the hurrying hand but verified in proof friends, you stand on sacred ground. This is a printing office