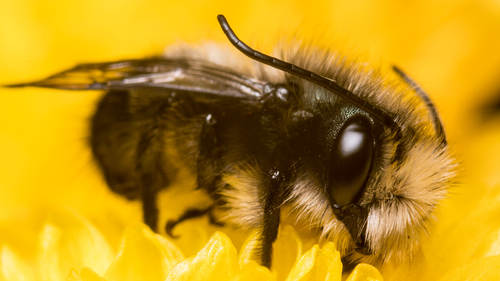 Focus stacking allows us to shoot at a narrow depth of field, but stack up a bunch of images together so that, once you've stacked them and merged them in Photoshop, that whole object is in focus, but the background's still blurry. It's a really neat technique, and I would recommend that you all try focus stacking. Let me show you a couple of other images that illustrate this point. Oh, what the heck, let's just show some macro shots. Here's an animal. This was in the Galapagos, one of my favorite places to travel to. Actually, that was in Guayaquil, Ecuador, and this is an iguana, using my macro techniques to focus on the eye. You can see my head in his eye. It's always fun to get yourself in the photo of a lizard. This is in Africa. This is a baobab tree flower. Took this with my 200 to 400 millimeter lens. Interesting, doing macro work with a 200 to 400 millimeter. This is one of those big honkin' lenses. That's the photo for this course. This is a bee. I took that in my office. I h...