Lesson 6 from: Making Fabric and Yarn with Sweaters 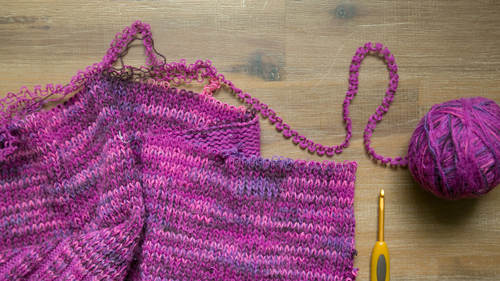 Lesson 6 from: Making Fabric and Yarn with Sweaters

It would be fun to show just a really simple crush a stitch and I kind of pulled the audience and you guys don't do you crash a don't ask you I know one pattern one granny square okay, we're used to and you yeah yeah so I made it for years and I loved him it but when I discovered kirsch a I I really like it a lot because it's just to me it's reportable all you need is a hook and a ball yarn and it is you can switch colors I think a little bit quicker and easier so we actually have there is a project in my book that uses a combination of the felted, the felted fabric that we made an admitted fabric and I will show you that and we're going to do a version of that here said this one is a blanket that I make a scene. Okay, um I started using scrap yard when I was watching tv at night too just in it squares we call engaged watches where you would just in it even square and I just needed something to do with a hand. So we're watching movies at night and I posted about thes on my block that I...