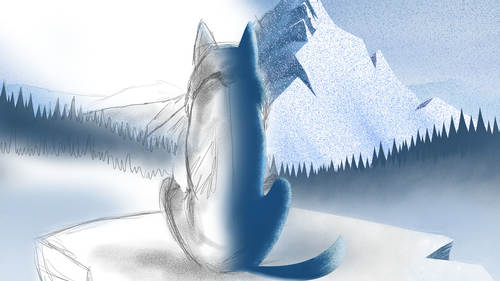 This is one of the great ways you can work between this app and things like Illustrator Draw is that I can turn off the background layer here, which is an opaque layer, gives you the illusion of paper underneath here. So, I'm going to double tap on that to hide it, okay? So, I've got a nice transparency thing there. Whatever layers are visible, they can be copied to the clipboard. And if I push this to Photoshop, which you'll see later on, then this will come in, and then the layers would actually be there, but turned off. But, here, I can go to the Share arrow at the top there and choose Clipboard, and it tells me it's copied to the clipboard. I'm going to move across to Illustrator Draw, we'll forget that one for the minute. Pretend it never happened. Just going to tap here for a new document, just there, bring that in like so. Then, I'm going to make the background layer here active, because when you introduce any new layer content, they're introduced directly underneath the directl...