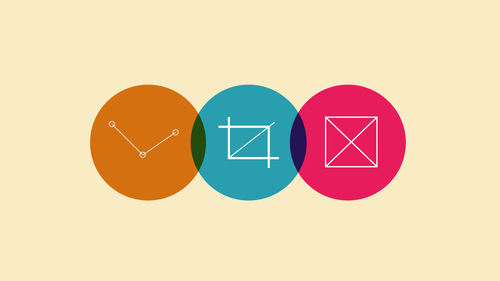 5. Q&A: Deciding which program fo use for your project

Work with Layers in Illustrator

Create a logo In Illustrator

Let's say you have that bakery logo there and you went in, you were in Illustrator and you changed the color from a pink doughnut to an orange doughnut, would the color update in InDesign automatically? Absolutely, and this is the great part about using the Creative Suite here is that everything integrates together so very well. So, because we don't have the editing capabilities of any of these files within InDesign because this is all part of the Adobe Creative Suite, we can very easily edit these outside in the application that it was created in and bring them right back in. So, I could just simply go in, I'm gonna show you this. I could literally go in to my logo here, and I could take my content, and I could change some aspect of the content here. Or I could go in and maybe change the stroke to be something different here. And if I change the stroke to be different, then I could go in and I could save that file. Okay, I pressed the wrong command there. That wasn't saved. That's s...

Such an important overview that clarifies and simplifies each piece of software and its role in achieving a beautiful and organized end result. Love Jason's brilliant and funny style and I appreciate his going into the "whys" of the software design evolution so it's not just memorizing methods but truly understanding what you can do even with a eye to the future changes. Fascinating, fun and empowering! My first Creative Live purchase!

Enjoying this class immensely. Havent used illustrator properly for a while but this class is refreshing my memory. Its so awesome and it makes illustrator seem so easy! Wow wow wow! Thank you Jason and Creative live

WOW!! Jason is a very engaging instructor. It's obvious that he knows the programs inside and out. He imparts a tremendous amount of excellent material in a very short time, he makes sense and he is well-spoken with a sense of humor and he doesn't get lost in the materials and have to bungle his way out, very well prepared. I've been using PS and IA for the past several years on and off and currently have 6 on my computer but looking at going to CC in the near future. Even with that experience, he provided tips and tricks for both that were very enlightening in using them more productively. I'm not so familiar with ID and I now feel that I have a working knowledge of all three programs. I've taken Adobe classes taught by other instructors and found them rather boring to drag myself through. Jason is not boring in the least! So if you aren't familiar with these programs or are even curious about them and want an excellent overview, I totally recommend that you take this class. You will definitely not be sorry and will get your money's worth. I took this when it was offered on air free of charge. The only down of taking it free is that there are downloadable materials that are only available by purchase which sound excellent and I would like to have them, but I want to take one of Jason's other classes and can't justify the expense of this class only for the downloads, because I am familiar with the programs and would be unlikely to actually watch the class again, and there is his interactive pdf class that I am really looking forward to......5 stars and all thumbs up for Jason's instruction!