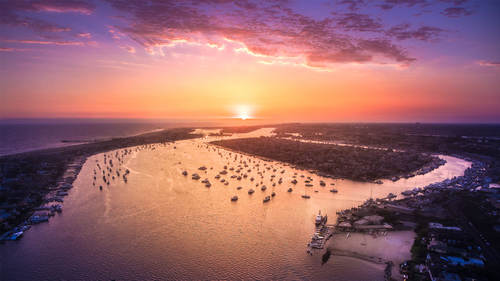 special types of photography. Now this is the basic rules, the special types of photography we can do with the drum. 1st 1 Birdseye, you could do something like this, and then people can look at it and be like, Well, what's going on here? I lent added that one, so you wouldn't be so mind tripped. But I had one. If I was just a corrupt and you saw that, you'd be like, What's what's going on? Is a guy getting around? Whoa, no, he's going sideways. I'm shooting straight down and once again is a boat straight down. You can get some great shut. Great for weightings, silhouettes, people that Jeff fosters daughter's wedding, actually, and then we go to something like that. Wonderful. Wow, what? Another concept. Let's shoot the wonderful from above. There's actually three waterfalls there, so you know you can do different things. That is in the big island of Hawaii. Just recently, trees almost want to get that shot of the trees. You know, you get a wide angle lens. Why not enjoy it then? You k...