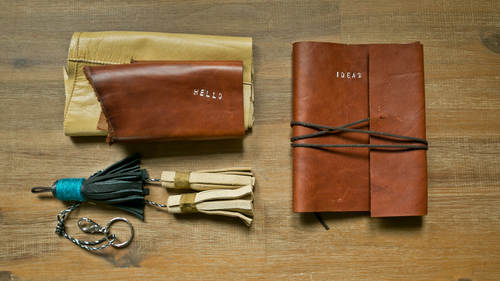 So to make these tassels, what I'm going to do is take my cleaned leather and I'm just going to cut a strip and it doesn't matter what size you can see each of these tassels are roughly three to four inches long total from top to the bottom of the tassel I really wouldn't want to make him that shorter than that, because then it turns into a leather pom pom might be too short, so, like three, four inches, you could make him longer, but for this one and because the width of my ruler is three inches, we're going to make a three inch one and it also doesn't matter how long you make the strip, I usually go about eleven inches I'm sorry I used like a seven inches when you get longer, you get into a thicker top, which is not a problem really did you just need to take that into consideration when you're cutting? So I'm going to cut a strip with my rotary cutter and my ruler yeah, heading into I have so that's one thing I didn't mention thank you you need a cutting map to use under your rotary ...

New leather is durable, but costly on your pocketbook and the environment. In Upcycling Leather into Accessories, Blair Stocker will help you find second-hand sources for fine leather and teach you how to transform it into fresh, workable material.

As the author of Wise Craft: Turning Thrift Store Finds, Fabric Scraps, and Natural Objects Into Stuff You Love, Blair is full of helpful tips on upcycling old goods. In this class, she’ll teach you how to make gorgeous new leather goods from old ones. You’ll learn how to:

Projects will include; journal making, bookbinding, tassel making, stamping, and printing – all with leather.

Upcycling Leather into Accessories will make leathercraft an affordable and fun addition to your creative arsenal.

Blair has a very clear voice and takes us through the projects in a very calm and clear way. The projects are inspiring and just the general idea of crafting with materials found at thrift stores really appeals to me so definitely recommend this lovely little class.