Lesson 11 from: FAST CLASS: Working Successfully with Clients: A Class for Illustrators and Designers 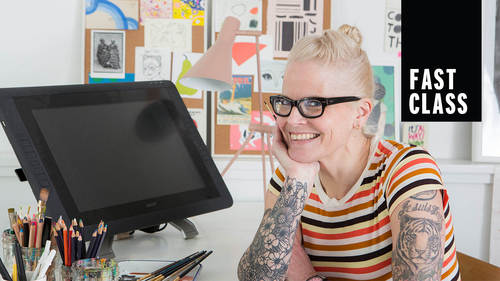 Lesson 11 from: FAST CLASS: Working Successfully with Clients: A Class for Illustrators and Designers

alright negotiating the contract most of the time. The basic terms will have been worked out over email. So as we discussed earlier, you're getting to the nitty gritty about timeline and a fee and art direction and all that stuff is in the back and forth of this ca legal email with the client. But you should always read every line of the contract and make sure that everything you did discuss over email or text or social media direct message is included in the contract. Don't ever assume. So you want to both make sure everything you discussed is included, but you also want to make sure that there's not stuff in there that is irrelevant or that you didn't discuss. Okay. So make sure that everything's agreed to make sure there's nothing odd that seems out of place. Okay, boilerplate. So this is a term that we use to describe contract, boilerplate contract is basically uh, a standard contract that a company uses for almost everything under the sun, um, when they're hiring a freelancer. Oka...

y. And usually these contracts include a lot of legalese, which is basically legal language. That is really hard to understand. So, if there's anything in the contract that you do not understand or doesn't make sense to you. My first strategy is to ask the client, what does this mean? I noticed this clause and maybe there's a few things, so you make a bulleted list like, You know, line 15 says this. I'm not sure what that means. Can you explain it? And sometimes they'll come back and say, oh yeah, that just means that blank, blank blank and blank. And so you can actually say, can we rewrite it to say what it actually means? Or maybe, you know, the legalese is acceptable to you once it's been explained to you. Sometimes they'll say, oh that's part of our boilerplate contract, that doesn't apply to this job, then you want to make sure it gets stricken and by stricken, it just means that it's crossed out and initialed by somebody at the company. Okay. If the client can't tell you what it means or doesn't answer your questions, that's a red flag. But be you want to make sure you get legal help now. Um legal help is, I'm going to talk more about this in a second. But it's especially important if you're signing a contract for a job that's on the larger side, right? Like if you're just doing an illustration for a magazine or, you know, a cover or a book, one book, illustration or a kind of smallish job. Um you can usually, the contracts are usually fairly simple and you can get to the bottom of things pretty quickly. But um, some contracts are really unwieldy and literary contracts are an example of that. That's why people have literary agents just to help them negotiate literary contracts. Um, but you want to make sure that you understand everything. And so getting legal help, especially when the contract is long and covers a lot of things. Like let's say you're making a lot of work for somebody around a big campaign or a big product launch or um, a big book, whatever, make sure you understand all of it. And sometimes that requires getting legal help. There are lawyers out in the world who specifically will you pay them a little bit of money for them to read your contract and give you advice on what's fair and what's not fair. And in the long run, especially if you're being paid a decent amount of money paying a lawyer a few $100 Or even a couple of $1,000 to help you with the contract is worth your time in the long run.