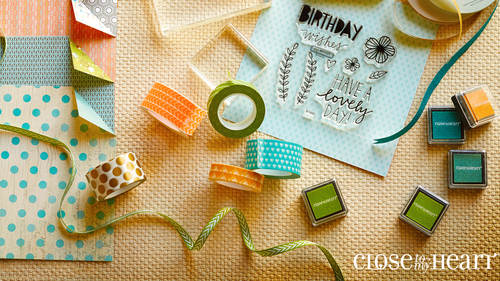 4. Stacy Julian: Why Stories Are Important

Close To My Heart Catalog Walkthrough

Close to My Heart Cartridges

Using Cricut to Create a Page

Connecting with Community through Social Media

Close To My Heart Events

So we are very, very excited for our next next segment. Here we have an industry expert who has been with close to my heart who has not been nickel smart. But who has we just started? She started with close that's. What simple about stacy julian. So the the stacey julian is here in studio with us. And stacy has her humble beginnings of this whole thing for her. Started with dots, dozens of terrific stamps. She was a dots demonstrator back in the day and actually worked with stacy for many conventions. We did some really fun things together. Stacy has written books here. I've got her real bio she's written a couple books in two thousand five. She also started big picture scrapbooking. She teaches scrapbooking and classes and how to tell your story. And so, without any further idea, we should welcome stacy. Julian e you're welcome guys. Their dream. I am loving this and really the most important thing that we need to do right now is just have cameraman come really close onto my face beca...

Close To My Heart

Led by founder and CEO Jeanette Lynton, Close To My Heart offers a wide array of papercrafting products, with special emphasis on scrapbooking and stamping. For more than 30 years, Jeanette has been a leader in the industry, making many significant contributions to these arts, and making Close To My Heart a premier resource for individuals wishing to enhance their artistic talents and pursue a successful business opportunity.
SEE INSTRUCTOR'S CLASSES

Celebrating 22 years with Close To My Heart, Chief Communications Officer Monica Wihongi has been an integral part of every aspect of the business. Her passion for Close To My Heart stems from the genuine love she has for the Consultants who make the company what it is. The savvy sales force inspires her in her daily responsibilities. That’s why, despite the many departments she manages, her favorite part of the job is training Consultants all over the world.
SEE INSTRUCTOR'S CLASSES

Jill Broadbent is the Creative Communications Manager for Close To My Heart. Creativity and education are the foundation of her role with the company. As an avid scrapbooker herself, Jill has spent 11 years teaching Consultants how to use products and create works of art to preserve their memories.
SEE INSTRUCTOR'S CLASSES

Karen Pedersen became a Close To My Heart Consultant in January of 1993 and has since built a million-dollar team and earned the title Senior Executive Director. She has presented at numerous national Conventions and Leadership events, appeared in several Close To My Heart instructional videos, had her artwork published in several publications, and has even represented the company in the nationally syndicated show,
SEE INSTRUCTOR'S CLASSES

As an Independent Consultant with Close To My Heart for over 22 years, Michelle Snyder has combined her creativity and love for the art of stamping, scrapbooking, and papercrafting to empower others to share life’s stories in simple but beautiful ways. Creating memorable moments is a passion that began with her two children and grew through her years as an elementary school teacher.
SEE INSTRUCTOR'S CLASSES

In 2005, after attending just one home gathering, Kristina Livingstone decided to join Close to My Heart, and the partying has never stopped! She has since risen to the top in sales on a business built primarily through home parties. Those parties have also helped grow her team, earning Kristina national team building and mentoring awards.
SEE INSTRUCTOR'S CLASSES

I have been stamping, making cards, for 10+ years but only found out about ctmh last year. I love, love, love your clear stamps. They are great to use and easy to store. These classes inspire me and get me all excited again about making cards. I just recently got a circuit, so much to learn. I've got to get me a ctmh cartridge!!!

This video series will provide all viewers with a fantastic overview of not just the wonderful products Close To My Heart has to offer but the creative environment they foster. Whether you want to craft personally or would like to see if this could grow as a business, watch this series and receive tons of information. Thanks CTMH and Creative Live!

I'm in love really with art ,craft ,colours, everything related to papers stamping writing party preparation, celebration wedding everything over and over things that course will be definitely increase my ability to innovate more and more ... thanks a lot for that free course with massive information love my heart to close to my heart